One of Kansas City’s premier sports painters, Anthony “AO” Oropeza, has captured the energy and excitement of the Kansas City Chiefs Super Bowl champ, Patrick Mahomes II,  once again!  This 36×48 mixed media piece was the perfect opportunity for AO to create a piece that showed the NFL’s number one quarterback (this writer’s and all of Chiefs Kingdom’s opinion) excitement for the game. 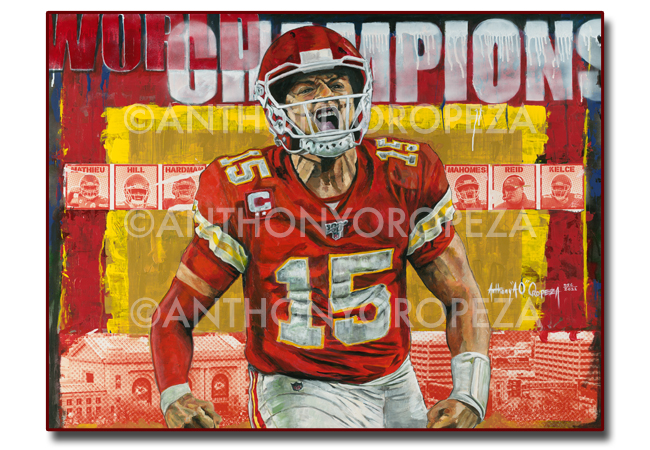 This 36″x48″ piece incorporates AO’s trademark abstract and gritty background, his excellent use of graphics, typography and manipulated imagery to compliment the larger than life image of one of KC’s greatest young quarterbacks.  AO’s centered position of Mahomes keeps the focus on him while the complimentary elements around him, from top to bottom, enhance his surroundings while drawing the eye always towards him.

“After Doug’s first couple ideas, I had a couple visuals already forming in my head.  After a few more questions (and after his wife told him multiple originals might be too much) I had a better idea of where we were going…”, say AO.

An AO Original – A Perfect Addition to a Home

In late 2021, AO received a call from a friend and she wanted to ask if he would consider creating an original for her husband and for their new remodeling to their rec room.  When AO sat down with them, the client explained his vision and answered a few of AO’s questions. “After Doug’s first couple ideas, I had a couple visuals already forming in my head.  After a few more questions (and after his wife told him multiple originals might be too much) I had a better idea of where we were going.  I quickly jotted down a sketch or two.  Once a few more details were hammered out, I started my research on the complimentary elements (color, imagery, layout, etc.) that would surround the subject – and then I was off to the races”, said AO.

After a few months of work (and a couple small delays) the piece was unveiled to it’s new owners – and like most of AO Originals – he loved it.  They both loved it.

The piece proudly hangs in their rec room and they have received countless compliments on the piece and they love having their very own AO Original in their home –  not only for the love and appreciation of original art – but because they love Patrick Mahomes and their Kansas City Chiefs!

Interested in a limited edition print of this piece, visit the AOART5 Store for the latest editions.

Commission Your Own AO Original?

With AO only able to create a limited number of originals per year, now is the time to get your name on the AO Project List for your very own AO Original.  Visit our Commissions page for commission details or our Contact Page to ask AO any questions and/or to schedule a visit to the AOART5 Studio in beautiful downtown Overland Park, KS.

Get the latest behind the scenes looks, WIPs videos & pics and cool shots of the many paintings and art and design projects AO has going.