AO’s Pre note: Writing critics beware … The article you are about to read was written by a really strong “C” student, non-trained writer, and rejected art student all in one – basically a failure in most peoples eyes.  So the content below may not be for you and your high journalistic standards, but don’t get me wrong,  I do understand the need for the high level of work quality, but for me, that comes with time and practice, or a budget to pay a writer.  Unfortunately, I am not there yet.  So please take note, I write this article with the hope that it will be useful to readers who are artists, any artist: painting, graphics, web, comics, ceramics, singing, sculpture, acting, writing, etc. – and especially if they are students, if they are entering the field of freelance, or they are older artists re-entering the field for the second or the twenty-second time.  So if you are a critic of some sort, this piece is not for you. So please don’t read this. I just want the audience it was intended for, and those who would like to take a peek at my view to read this. I want to hopefully inspire – because for many artist and designers – inspiration helps us immensely.  Thanks – ao

The interview, in my opinion, went pretty well and pretty smooth.  Before we sat down in front on my unfinished 6′ x 3′ “Game 5 – Hosmer Slide” mounted up on my wall, we (all three of us – camera guy included) chatted a bit about it.  We chatted about the importance of me including the right foot/cleat of the Mets catcher (Kevin Plawecki) in the bottom left of the work.  I then explained the piece was my first piece of my next big sports project named “Royals Moments”. The series is going to be a small collection of 6 foot paintings of my top 5 favorite Royals moments and Hoz’s slide in game 5 is definitely the first.

I couldn’t express in precise words the feeling of the city, but I have to say it was really really close to the 2014 and 15 seasons here with our Royals

Nevertheless, having Mr. Shpigel in the studio viewing both the finished and unfinished work meant a little bit more to me because he worked in New York (and for the Times) and wrote about our series vs. the Mets, A World Series Crystal Ball With a Spin (Oct 27, 2015).

So I did not record the interview, I wish I did, but most of my remarks were about how we hadn’t felt this kind of excitement about a team since Montana (Joe), and that this kid (Mahomes) with his type of play, his focus, his interviews and what kind of upbringing reported that he had – the city was experiencing a level of excitement like we have never – ever – experienced before him.  And note, this interview was before the Jan. 2019 AFC Championship game.

And of course I had to mention my disappointment of us (the Chiefs) never using our first round draft pick in1983 on a consistent basis, the strapping Todd Blackledge from the National Champions (’82) of Penn State.

Nevertheless, we chatted for a bit, maybe about an hour or so, and I couldn’t express in precise words the feeling of the city, but I what I did tell him was that the feeling I got from the city was really really close to the 2014 and 2015 seasons here with our Royals.  It really did feel that way, and does today a season later, as we are one win away from being Super Bowl champs.

Then the interview was over, I asked him to autograph one of my favorite articles he wrote “The Loneliness of the American Paralympics Reporter” (Mar 2018), and he gave me his card.  We shook hands and he and the photographer were out.

Then I took a breath and said to myself, “I can’t believe I just had a New York Times reporter in my studio … about my art work … that’s some pretty cool stuff”.  Then I took another breath, got some coffee, called my kid about it (enthusiastic teenager, of course) and then got back to work on the project.

So Mr. Spighel’s article hits The New York Times web site first early in the AM, like 12 or 1AM – “He’s Ours. Patrick Mahomes Is Ours.”.  Then it hits the stands by morning.  The New York Times in 2018 had an average paid readership of approximately 992,000.

So that morning I drove to Starbucks (that’s the only place close that I knew carried The Times) for a copy or two.  I walked in and before I even bought one, grabbed the top copy put it on the nearest table and went straight to the sports section. Turned a page or two to see it. BOOM!  There it was.  My “Mahomes” piece was in paper.  My first “Mahomes” piece was in the freak’n New York Times.

I was floored.  I tapped the image in the paper of my work, and thought, ‘There it is.  It made the cut.  It made the cut’.  A rush of something came over me for about 10 seconds.  I don’t know if it was adrenaline, relief, validation, accomplishment, fear or a mix of all them.  And then I thought, ‘I wonder what my Mom and the kid are going think about this?”  Why?  Because this is pretty cool stuff. 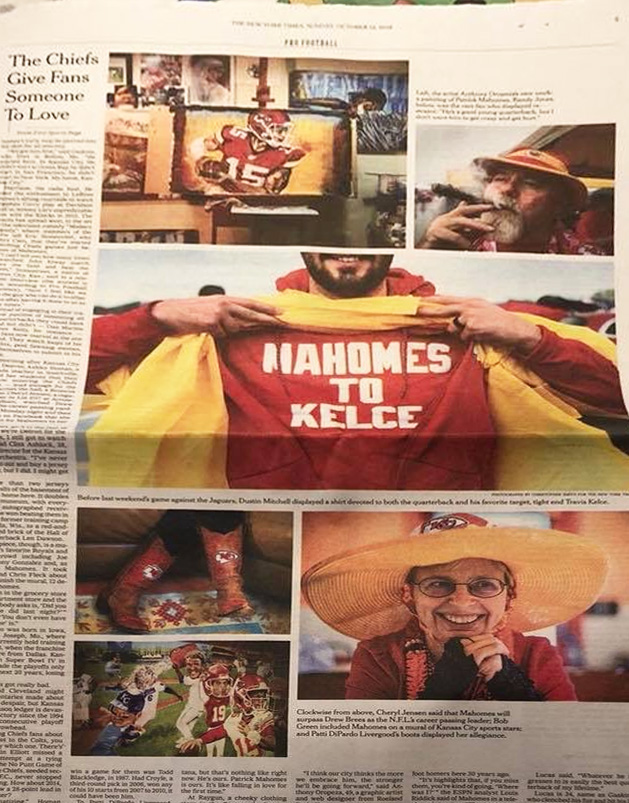 After a second or two, I recalled a couple things.  I recalled all the hard work, late nights, consistent pushing of my work on social media and at my art shows, and other various behind the scenes marketing and art work in the past 5-6 years. And then I thought, this image in this paper was not just the work of me alone. The image showing in this paper was also a combination of work of volunteer help, mostly friends and family throughout the years – that is what this image meant to me.  And man, I am so thankful for them.

As I said, that image being in the paper was a result of a number of different people, friends and family, too many to name, helping me move easels, set up art shows, allowing me to borrow their venues (restaurants), easels, cars, vans, tents, tables and time.

The funny thing about that moment, about my world, and about my life as a freelance creative, is that we spend a ton of time alone, mostly working in our studios and when moments like that happen, moments of accomplishment, peaks of achievement, or recognition, and historically in the past they did not happen very often for me, its a pretty cool feeling.

And as a creative, I believe you have to enjoy the moment and build on it – then gets some coffee (and water) and get back to work.

So after I got myself together, because you can’t just go around high-fiving or fist bumping total strangers in coffee shops, I took a breath, pat myself on the shoulder, turned around and grabbed the remaining 4 or 5 copies on the rack, took the stack to the counter, bought me my coffee and papers, and left with my copies of me in the October 14, 2018, New York Times Sunday edition.